Plan B for Scottish Independence

3. Finally hold indyref2 with the level playing field of fair broadcasting coverage of the strongest arguments for independence that the BBC would never broadcast – all the many arguments against Queen, Kingdom and Empire, explaining how and why an independent Scotland governed democratically as a Scottish republic with an elected president would make all the difference to Scottish independence and to dealing with problems of the incompetence of royalist misgovernment and mismanagement.

The Road Map to Scottish Independence

We march for independence raising our own Scottish flags in defiance of the tyranny of the United Kingdom.

We note the unjustified arrests in Scotland by the United Kingdom police force styled as “Police Scotland”.

We note the unjustified imprisonments in United Kingdom prisons styled as “Her Majesty’s Prisons”.

We are offended by these UK violations of the constitutional rights and freedoms of the People of Scotland.

We assert and act in defence of the constitutional sovereignty of the People of Scotland.

We overthrow the misrule of the United Kingdom and its monarch, Queen Elizabeth.

We ban Queen Elizabeth and her family from Scotland!

We call on any military to enforce our ban by using all means necessary!

We unilaterally declare that Scotland is an independent country!

We call on the Scottish Parliament to agree a motion in similar terms. 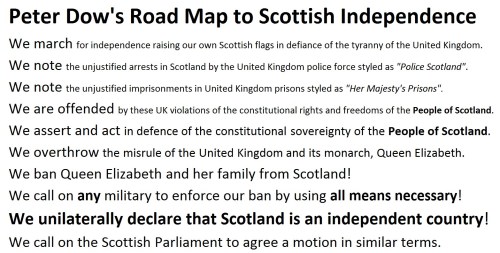 The “Gold Standard” for Scottish Independence

The BBC broadcast Ian Blackford at the SNP conference, claiming that his Plan A is the “gold standard”.

I beg to differ.

In my opinion, Plan A, straight from the Alex Salmond playbook, is not the “gold standard”, not with the BBC rigging politics coverage, giving the Queen and her ministers a get-out-of-jail-free card every time.

The 2014 indyref with biased, unionist BBC politics coverage and censorship of the best arguments for independence was the wooden-spoon standard of independence referendum and a unionist trap that the UK puppet Alex Salmond fell right into.

So thanks but no thanks. No more wooden-spoon indyrefs for Scotland.

The Treachery of Plan A royalists

Standing to sing “God Save the Queen”, the First Minister of Scotland, Nicola Sturgeon, seeks to make Scots subjects of the Queen of England, contrary to the Sovereignty of the People of Scotland, as enshrined in the Declaration of Arbroath, 1320.

Blair Jenkins, Order of the British Empire, was the Chief Executive of the YES-Scotland campaign in 2014, is shown in the picture with Prince Charles pinning his OBE onto his jacket. 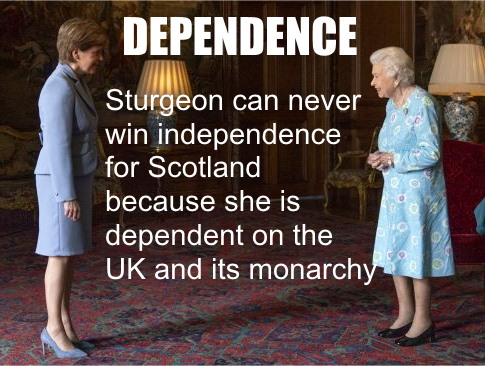 Plan A royalists, like Alex Salmond, Nicola Sturgeon and Blair Jenkins are saying “YES” to monarchy, the most iniquitous form of government, “YES” to inequality, “NO” to a Scottish republic and “NO” to the democratic election of a Scottish President, duty bound to defend the rights of all Scots as equal citizens.

Plan A royalists are traitors against the people of Scotland and that’s why their Plan A campaigns ring hollow with many and will collapse like a house of cards whenever the BBC broadcasts the Queen telling Scots to “think carefully” etc.

The movement for Scottish independence cannot allow the SNP’s Plan A to wreck our chances of winning our freedom once again.

Now we have this Plan B for Scottish independence and I propose that we put this Plan B into effect without further delay.

One response to “Plan B for Scottish Independence”