Abusing teenagers in love since 2007, the puritanical SNP government to “overhaul” itself 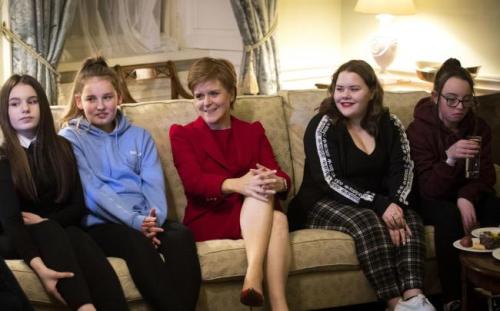 That would be “overhauling” the cruelty imposed by the SNP governments since 2007, presumably?

Sturgeon sitting with those girls looks like butter would not melt in her mouth but she voted for puritanical legislation that, on the face of it, could lock up any older children – for up to 10 years – for engaging in consensual sexual conduct with their classmates, boyfriends / girlfriends etc.

Sitting on the sofa with the First Minister one day then soon after experimenting with love, as teenagers may be tempted to do, arrested and forced into the dock of the High Court for a sentence of up to 10 years imprisonment!

Sturgeon is, so to speak, the wicked witch-finder general of the cult of her devolved Scottish government – clueless on delivering independence but spending £billions on a sadistic police state to witch-hunt and to hurt young Scots for doing what comes natural to them.

Why did Sturgeon come into politics – just to hurt young people?

Is her envy as a barren woman who missed her chance to have a family of her own and who will stop at nothing in revenge to punish teenagers with up to 10 years in jail to stop them from trying to start their own family?

Some teenage mums can, the SNP’s Sexual Offences (Scotland) Act 2009 legislation suggests, be locked up for years in prison – just for daring to become a mum – and possibly driven to suicide – that is the cruel fantasy of Nicola Sturgeon that she and her party has made the law of Scotland in this United Kingdom that the SNP are puppets of. 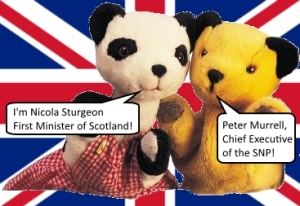 Abortions are to be insisted upon to appease the Sturgeon death-cult wherever possible, sadly.

If Sturgeon couldn’t have a family, she will, it seems, get her revenge on life by doing her level best to stop younger Scots from having families too and the young people in her care are the ones she can pick on most easily.

Is that why she came into politics – to kill the sex drive, to kill love, to kill fetuses and if babies “regrettably” must be born, “why not” have their mothers kill themselves in prison?

For Sturgeon’s puritanical devolution cult, as for Edward Longshanks, “the trouble with Scotland is that it is full of Scots”!

This beautiful photograph illustrates the kind of thing that it seems Sturgeon and the puritanical SNP hate most of all and want the law to allow judges to lock teenage girls up for, for up to ten years.

Daily Record: ‘She’s changed me completely’ Teen pregnant at 14 says daughter inspired her to work hard at school and excel in exams