EVERYONE entering Scotland will have to be tested and quarantined, especially those with a legal reason to enter Scotland – such as Scots returning from visiting friends, relatives or business associates in England.

That means adding road blocks with diversions to managed quarantine facilities all along the border. 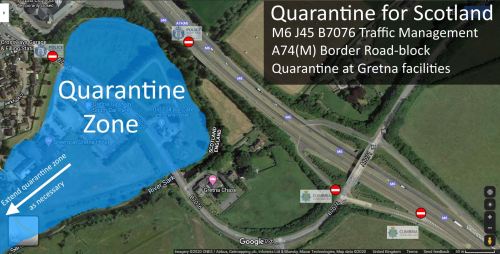 For example, the A74(M) would have to be closed at Gretna, most likely northbound traffic road-blocked on the border itself, asking Cumbria police to divert traffic northbound for Scotland to turn off the M6 at the last junction (45) and those wishing to quarantine take the B7076 for quarantine facilities just across the border in Scotland, in the area in and around the Greens at Gretna Hotel and the Gretna Gateway South Car Park – with additional caravan camp type facilities added to cope with the expected number of people to be quarantined. 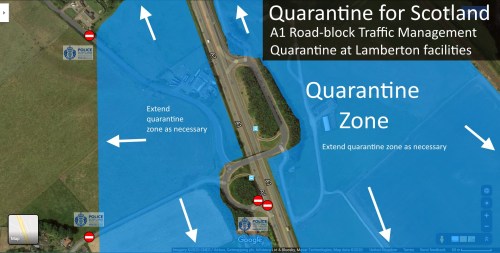 There would probably have to be enabling legislation through the Scottish Parliament to allow the Scottish government to make compulsory purchases of buildings and land in those “quarantine zone” areas required to be used for managed quarantine facilities.

All that work should have been done years ago as part of pandemic preparedness, but of course wasn’t done because the United Kingdom is totally clueless.

Realistically, this would increase the costs of delivering to Scotland from England.

Quarantine for Scotland would mean that all northbound cross-border passenger train services will be suspended.

Whilst it is simplest just to ban all cross-border passenger trains, it is possible, if complicated, to allow southbound passenger services to continue.

Southbound trains could continue service with the understanding that drivers, guards and passengers who cross into England will be expected when returning to Scotland to serve quarantine before being free to enter Scotland again.

Northbound west-coast railway-line train passengers can take the train as far as Carlisle then get a bus or taxi to the Quarantine at Gretna facilities. After serving 14-days quarantine, they can take a bus or a taxi to Annan railway station. 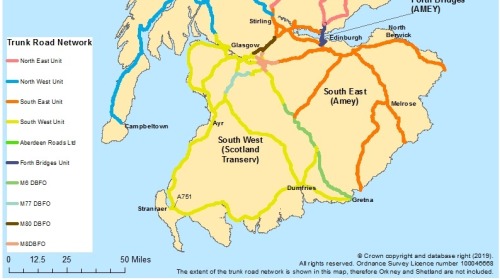 Quarantine for Scotland would mean that the Scottish Government would have the responsibility to order the closure of only the 4 or 5 trunk roads which cross the border with England (see above map) and the local roads through the Quarantine Zones.

Other local roads should be blocked at the border crossings by the 2 councils on the border – the Dumfries and Galloway Council and the Scottish Borders Council.

Quarantine for Scotland would leave the power with the councils to decide if they want to block their own local roads at the border and to decide what help to ask from the Scottish government to close the border crossings successfully. Although how hard can it be to place a few skips to block the road at the border with England?

Of course if unauthorised persons were trying to clear the roads that the councils had ordered closed then the councils could ask for help from the police and the Scottish government to keep their roads blocked at the border.

If the border councils refuse to close their roads at the border with England then Quarantine for Scotland could be easily circumvented by travellers from England crossing using council roads.

However, that wouldn’t stop the police from arresting those who had travelled from England by circumventing the quarantine facilities – if the police could catch them, if not at the border then somewhere else in Scotland.

So Quarantine for Scotland, even if it closed the trunk roads, the railways, the airports, the sea ports for passenger entry to Scotland, would only be 100% effective if the border councils agreed with the idea of stopping getting re-infected from England and helped by closing their own roads at the border too.

The Scottish government could attempt to persuade border councils to close their roads at the border – plenty of carrots but no stick. Also the use of public health messages on TV could explain how the lack of co-operation from border councils on closing the border was a bad idea and voters should contact their councillor to ask them to get the council to close the roads at the border, etc.

Coronavirus in Scotland: SNP MP Angus MacNeil calls for police to patrol Scottish border if lockdown is eased down south