To all MSPs: Please help free political prisoners in Scotland

Congratulations on your election (or re-election).

Perhaps it was easy enough for you to avoid being taken political prisoner on this occasion? All you had to do was to swear or to affirm your allegiance to the Queen.

Had you refused to do so as a matter of political conscience, you could have been arrested as a political prisoner, not today, but after a couple of months of turning up to the Scottish Parliament and refusing to utter those required words.

For others in Scotland, it is not so easy to avoid being taken political prisoner, being held in a police cell or in one of Her Majesty’s Prisons. It’s not easy for those of us with a sense of duty to the truth, to our conscience, to keep quiet when we feel we should speak up or write and publish, perhaps to save the life of someone who is not the Queen but whose life is worth just as much.

The Scottish Parliament budgets about £3 billion a year for “public order and safety” but not all of that money is properly spent. Some of that money is misspent on the taking of political prisoners, some of whom are scientists, like me.

It is important for MSPs to speak out against the taking of political prisoners, to say that it is “unjust”.

MSPs cannot credibly duck their collective political responsibility for the actions of the police, prosecutors and courts in Scotland, ruled as part of the United Kingdom of the monarch to whom you have all just expressed your allegiance to, governed by the Scottish Government whose First Minister MSPs elect.

I note that only the other day that Whistleblower Craig Murray Sentenced To 8 Months In Prison Over His Reporting On Former Scottish First Minister’s Trial.

I had little interest in that trial as it seemed to me to be a bit of a Punch and Judy contest played out in the courts between the former and current First Minister, a politically motivated prosecution, but my interest has now been attracted by the court’s expressed intention to take a political prisoner and for a term of imprisonment far longer than anything I have ever had to endure, as I document on my Political Defence Blog.

The contempt of court finding of Craig Murray is all, so the lawyers say, something to do with “Jigsaw Identification” but I put the pieces of the political puzzle together in such a way as to hold to account the First Minister for her misgovernment that is allowing the taking of political prisoners.

The jigsaw image to put together is this one. 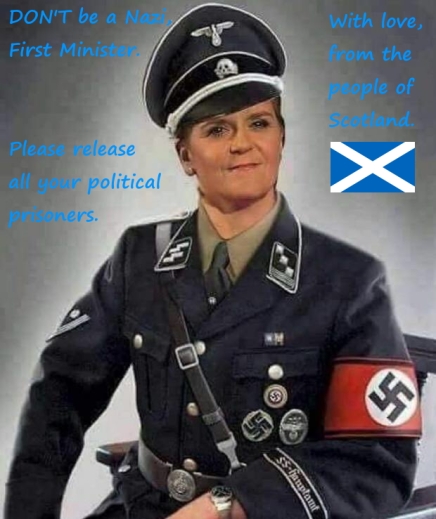 Some of the text of my email sent this afternoon to all Members of the Scottish Parliament, newly elected in May 2021.