Charles is NOT King in Scotland where the “Union of the Crowns” may be unconstitutional.

Today’s meeting in St James’s Palace, London, the deliberations of the UK Privy Council meeting as an Accession Council upon the death of Queen Elizabeth and its proclamation of “King Charles” aren’t definitive as regards the constitutionally independent country of Scotland, never properly unified as just a part of the United Kingdom.

The constitution of the Kingdom of Scotland was clearly defined by the Declaration of Arbroath in 1320 which renders as unconstitutional any union of the crowns, including that attempted in 1603.

In bearing the Lion Rampant, historically the Royal Standard of the Kingdom of Scotland,

it was my duty to challenge the legitimacy of Queen Elizabeth in Scotland and to point out to my fellow Scots that we were under no constitutional obligation to welcome Elizabeth to Scotland as the monarch whom the UK chose to foist upon Scots.

As far as I am concerned, as a supporter of Scottish independence who is seeking to establish a Republic of Scotland where Scots can democratically elect our own president as head of state, I didn’t welcome Elizabeth and her family to Scotland

and my lack of welcome applies equally now to her right Charlie of a son and his family. 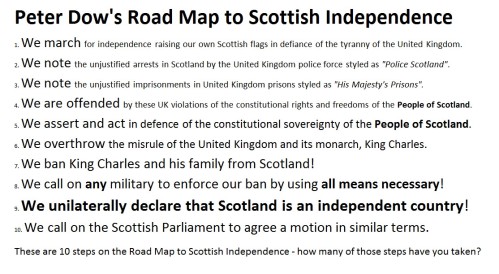 In my opinion, it is long past time for Scots to flush the medieval institution of monarchy down the toilet of history and we can do that most easily by banning Charlies and the Windsor royal family from Scotland, including banning them from Balmoral, Aberdeenshire.